Biology from an engineering point of view 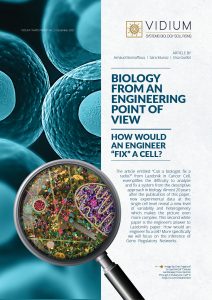 How would an engineer “fix” a cell?

The article entitled “Can a biologist fix a radio?” from Lazebnik in Cancer Cell, exemplifies the difficulty to analyze and fix a system from the descriptive approach in biology. Almost 20 years after the publication of this paper, new experimental data at the single-cell level reveal a new level of variability and heterogeneity which makes the picture even more complex. This second white paper is the engineer’s answer to Lazebnik’s paper: How would an engineer fix a cell? More specifically we will focus on the inference of Gene Regulatory Networks.

As stated in the previous Vidium White Paper entitled “Challenges, limits and opportunities in systems biology“, biologists are facing the big challenge of complexity. The recent blooming of single-cell assay technologies provides an unprecedent opportunity. However, this data is exploited by means of descriptive approaches: clustering, gene ontology, functional annotation, correlation, etc. This process is necessary but not sufficient to reach the goal of any experimental science: to find the underlying fundamental rules that drive system complexity.

Between the 19th and 20th centuries, Physics successfully defined an incredibly limited set of four fundamental rules that are responsible for all physical phenomena observed in the Universe, including gravity. Following the discoveries by English physicist Francis Crick in the 1950s, Biology defined the “central dogma” of DNA, a potential invariant.

Once the Human genome was sequenced, biologists thought momentarily that they would be able to fully explain how human cells work. Indeed, DNA is a perfect candidate for the invariant rule of the human system, while RNA and protein are just variant products. However, as we all know, the genetic code by itself is far from sufficient in explaining the gene expression regulatory mechanisms that drive cell phenotypes and the complex mechanisms underlying the behavior of a complex living system.

In this paper you will discover basic notions, essential to formalize and understand the behavior of living and autonomous engineered systems:

Manage Cookie Consent
To provide the best experiences, we use technologies like cookies to store and/or access device information. Consenting to these technologies will allow us to process data such as browsing behavior or unique IDs on this site. Not consenting or withdrawing consent, may adversely affect certain features and functions.
Manage options Manage services Manage vendors Read more about these purposes
View preferences
{title} {title} {title}