Vidium is a young Lyon-based start-up that was launched in late 2018 with support from Inria. They develop digital twins in cell biology, innovation with its roots in the world of industry, for use in public and private research in the field of personalised medicine and health. 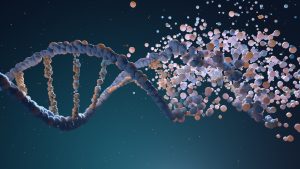 Launched in December 2018 when Arnaud Bonnaffoux, an engineer and researcher, came together with Sami Bou-Antoun, a doctor and entrepreneur, Vidium was supported from the outset by Inria, and has just raised more than a million Euros as they seek to expand their business. Based in Lyon at the ENS de Lyon (École Normale Supérieure), the start-up has been granted Deeptech and French Tech Seed status and has eight full-time employees on the payroll. It specialises in designing, developing and operating algorithm-based software and solutions applied to the fields of life sciences.

For the two founders, a new chapter in an adventure that started three years ago is set to begin. But we can trace the start-up’s origins further back than that, to 2015 and a project that Arnaud Bonnaffoux was working on at the time: “After studying aeronautical engineering and ten years spent in that sector working for Thales Avionics, I sought out a change in my career. ”After returning to education during time spent on individual training leave, this graduate of the Supaéro (l’Institut supérieur de l’aéronautique et de l’espace) turned to biology. Bonnaffoux graduated with a Master’s degree in molecular biology from the University of Toulouse and went on to spend three years working on a CIFRE PhD with Cosmotech, a digital start-up that also started at the ENS de Lyon, with a partnership between the LBMC (Cell Modelling and Biology Laboratory)* and the Dracula project team** at the Inria Grenoble – Rhône-Alpes research centre.

” During my PhD research I applied digital simulation and modelling techniques which are widely used in industry in order to tackle problems in cell biology. The main aim was to understand certain mechanisms of cellular differentiation, such as those involved in degenerative diseases, explains Arnaud Bonnaffoux.”

Central to this innovative modelling was the concept of “the digital twin”. A computerised representation of a complex system – such as an ecosystem, a machine, the climate or the human body – a digital twin is a decision-support tool. Drawing on realistic simulations, that can be used to tackle forward-facing questions and to guide experts (doctors, engineers, managers, etc.) in their decision-making processes.

“Digital twins are created using quantitative data on a given system and mathematical models which synthesise the knowledge held by experts (doctors, biologists, chemists, etc.).”But even in vast quantities, data alone is not enough to describe complex systems without the capacity to predict how they will develop. Once mathematical models are added, this data can then be used to make predictions.

” In the aeronautical industry I used and developed digital twins for applications such as designing automatic pilots.I then applied this technology to systems which were just as complex, such as genetic networks, in order to simulate their interactions and to understand the consequences of gene mutation.”

Sami Bou-Antoun, an expert in immunology and an innovation adviser, didn’t simply stumble across Arnaud Bonnaffoux’s research into the use of digital twins in biology. As he explains,

” In genetics, research operates like in a ‘black box’. Scientists know the ‘healthy’ and ‘diseased’ states of cells, but they don’t yet have a detailed understanding of the mechanisms involved in the development of genetic diseases.”

Digital twins can be used to study these mechanisms owing to the way in which the simulations they allow are based on models which recreate biological reality. “The models developed by Arnaud also make it possible to factor in ‘stochastic’ or random processes: the mechanisms of gene expression, which scientists are keen to understand, are in fact random”, outlines Sami Bou-Antoun.

What’s more, these models reached maturity at a time when researchers in genetics had tools with the capacity to characterise living cells individually. “The convergence of these technologies meant we were able to imagine the innovations we have gone on to develop with Vidium”, explains Arnaud Bonnaffoux. The start-up is now offering IT solutions to researchers and experts in both the public and private sectors, working within major industrial groups or research laboratories in France such as INSERM (the French National Institute of Health and Medical Research) or the CNRS.

Scientific and strategic involvement from Inria

Using IT to explore the dynamics of genetic networks, in which single genes interact with more than 300 other genes at random, requires considerable processing resources. Vidium turned for help with this to Inria, and in particular the Avalon project team,*** in order to optimise the necessary algorithms and processing resources. “Inria’s involvement in our project extended beyond the purely scientific aspect”, explains Sami Bou-Antoun.“The institute gave us vital support through its start-up support initiative, funding the salary of an IT engineer for the whole of 2019 and advancing funds at a time when our savings were no longer enough to continue funding our project!”

Vidium is now on the path towards ambitious economic development and is keen to expand – not just in Lyon or in France, but also overseas, where a number of their clients are based.

” We are looking to recruit engineers with experience in both IT and biology: Vidium’s success has been based on the quality of our employees and a multidisciplinary dynamic.”

Since the company was created, Sami Bou-Antoun and Arnaud Bonnaffoux have very much embodied these values.

* A mixed research unit involving the CNRS, the ENS de Lyon and INSERM, the LBMC studies the molecular foundations of both the normal and pathological behaviour of cells.

** A mixed team of IT engineers and mathematicians from Inria Grenoble Rhône-Alpes and biologists from the ENS de Lyon which is a joint undertaking with the CNRS, the focus of Dracula is on the mathematical modelling of different processes linked to haematopoiesis, which is the formation of blood cellular components (hence the team’s name!)

*** Avalon is a mixed team, a joint undertaking involving the CNRS, Inria Grenoble Rhône-Alpes, the ENS and the University of Lyon which specialises in high-performance computing.

Manage Cookie Consent
To provide the best experiences, we use technologies like cookies to store and/or access device information. Consenting to these technologies will allow us to process data such as browsing behavior or unique IDs on this site. Not consenting or withdrawing consent, may adversely affect certain features and functions.
Manage options Manage services Manage vendors Read more about these purposes
View preferences
{title} {title} {title}